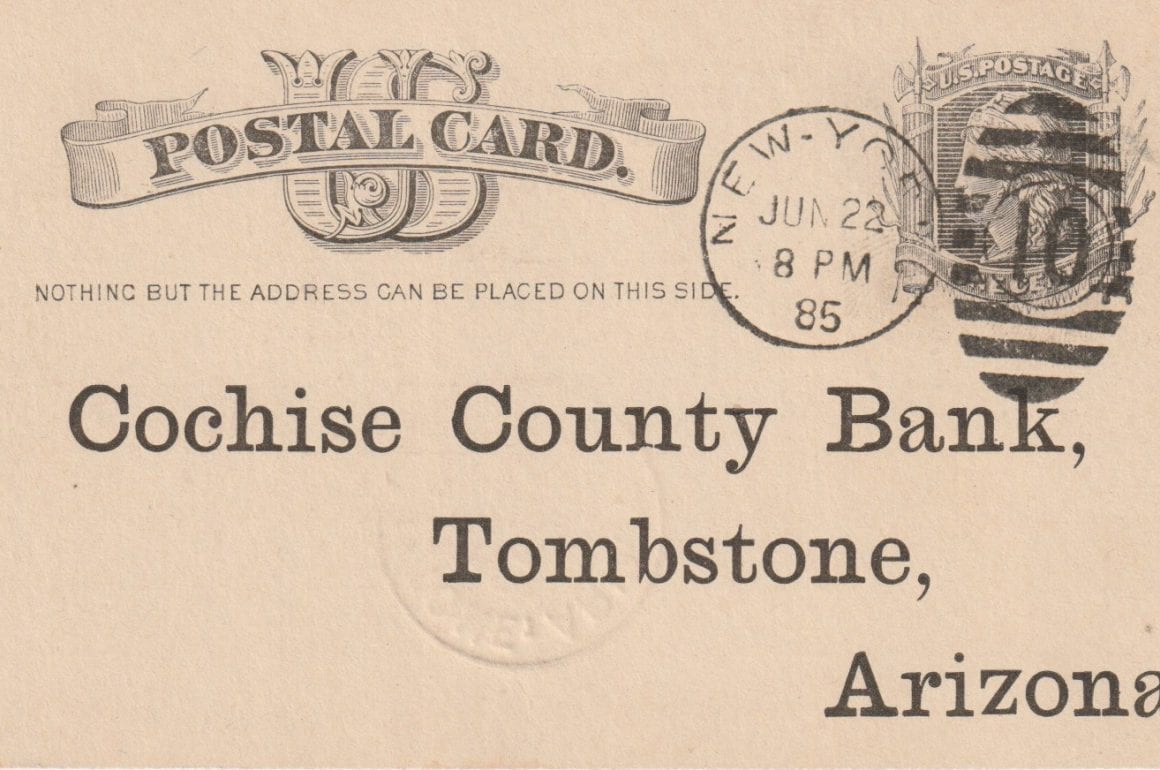 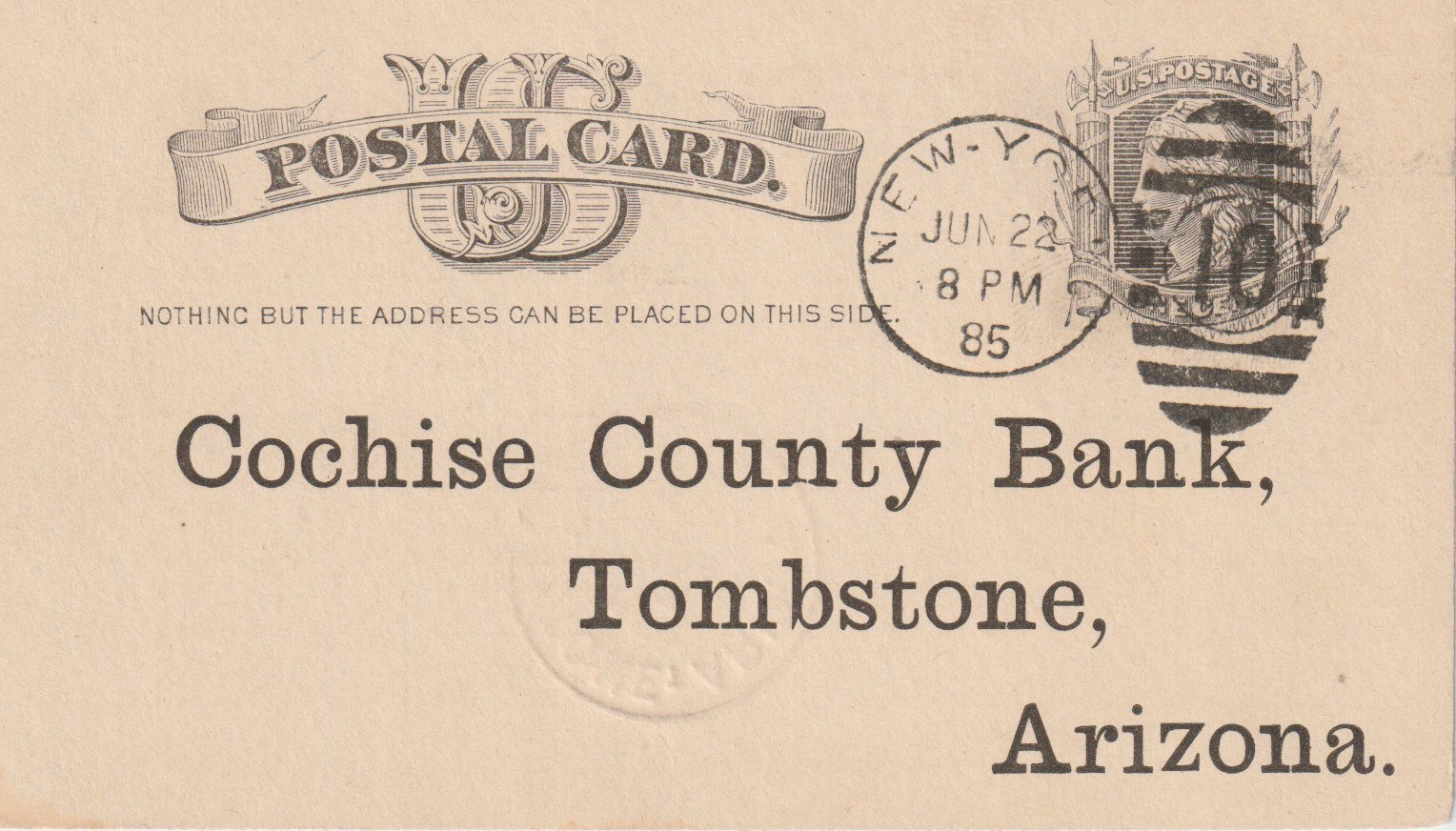 This card goes in a couple of categories. One of these is that I give up. I’ve been trying to figure this out for a few months, I’ve asked a ton of people. I sent it to the American Museum of Finance. I did get a response, but it was along the lines of – we think it might be…

I have chosen to post this, with some assumptions I’ve made based on the time period and my lengthy tenure in financial services. I started working in wealth management in the days when things were still done on paper, although I’ve never seen anything like this.

I bought the card because it is from Tombstone, Arizona, which in the history of the west, is probably the most famous town ever. I likes the multiple stamps, one of which is an embossing stamp, meaning I can feel it on the opposite side of the card. I love the fact that it went from Tombstone – the middle of the desert in a wild, wild part of the west to a bank in New York City.

Chemical National Bank sent the card to Cochise County Bank in Tombstone, Arizona. It may be that Chemical was the correspondent bank for the Tombstone Bank, being, essentially, the bank to the local bank.

I have no idea what the 13 – 16 stand for, nor do I understand what appear to be dollar amounts on the lines below.

I want to think this was a deposit of silver or gold, that was carried on a stagecoach from Tombstone to somewhere east, then on a train to arrive in New York City. Then, the cashier sent this card back to Cochise County Bank acknowledging receipt and the deposit. Perhaps some reader will be an expert on this topic of history and will tell me.

Tombstone itself is best known for the gunfight at the OK Corral. The town was full of gunfights. Perusing the paper of the time shows lots of fighting between lots of different people. Quotes from diaries talk about the gambling, the ladies of the evening, drinking and Indian raids.

Tombstone had every kind of shop, selling every kind of thing available. I wonder, if the veins had not run out, what kind of cosmopolitan city would have grown up there? It was already quite diverse, very wealthy and people were spending.

The newspaper: The Tombstone. Dated June 29, 1885 has a number of interesting ads and articles, below.

A shoe store ad proclaims: “Ladies Take Notice. We have fitted up a parlor exclusively for the purpose of fitting on shoes. Ladies will find this to a be a great convenience, as it is entirely apart from the store.” I wonder if the good ladies of the town mingled in said parlor with the ladies of the evening?

There are many ads for cure-alls, for serious lists of gruesome sounding illnesses and conditions. The OK Corral was advertising horse boarding and care. The famous gunfight had just happened 4 years earlier. The Calico Ball was announced, hosted by the Fire Department. I wonder if this was a fund-raiser, since most fire departments at the time were volunteer.

In the news section of the paper from the date of this card, a story covers availability of watermelons stating: “Those who desire a good watermelon, should go to Norris’ butcher shop, where you can get melons of all sizes and at all prices, he having just received a car load from Los Angeles.”

And, to end this post, with a nod to a future post card, Tombstone is home to the world’s largest rose bush. A poetic juxtaposition – the beauty of a rose in arguably the roughest town in the West.  Until next time… 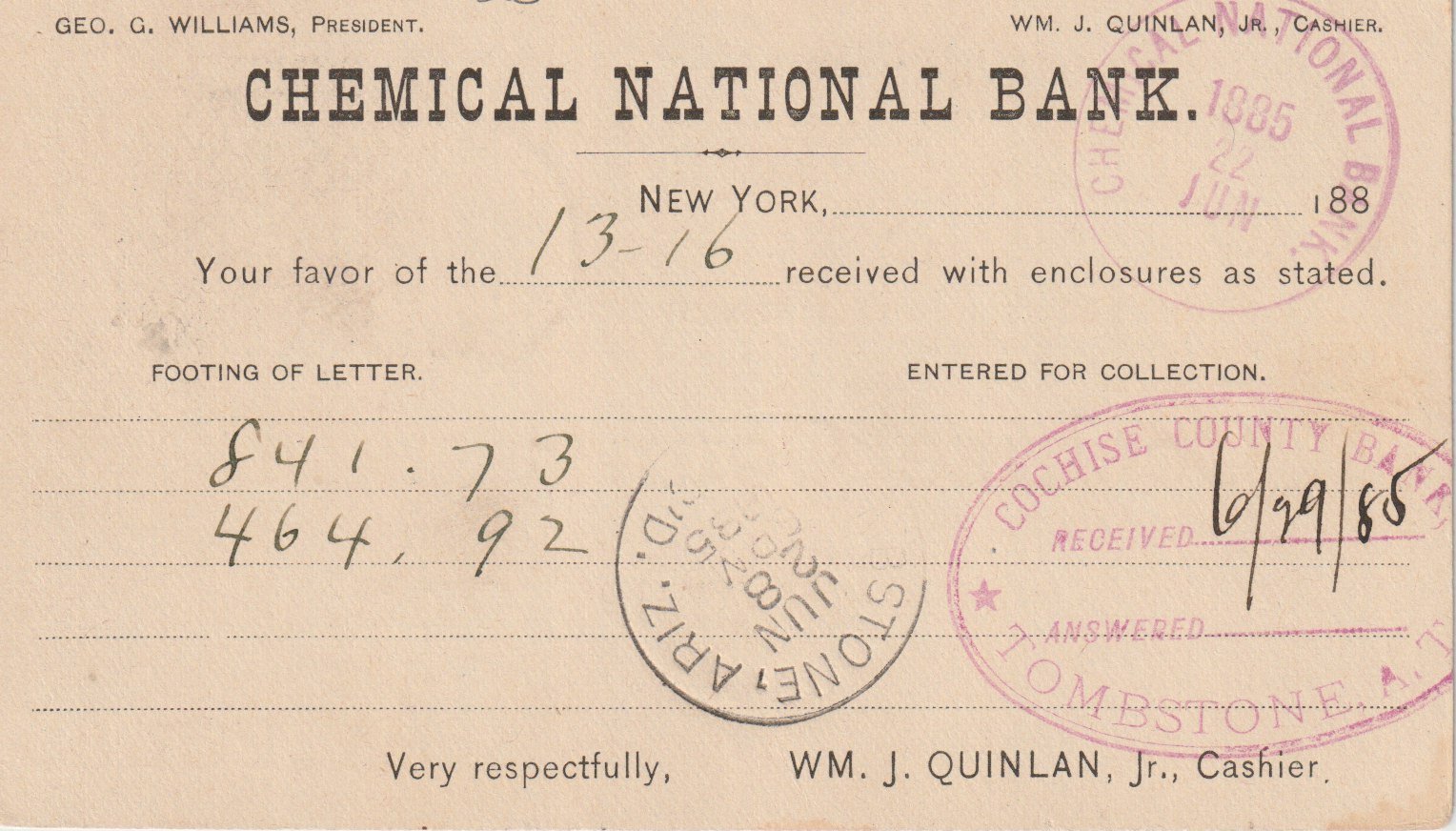 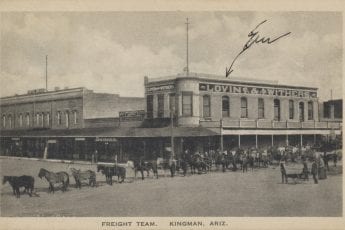 LOVIN AND WITHERS & GABLE AND LOMBARD 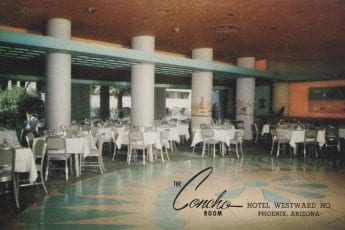 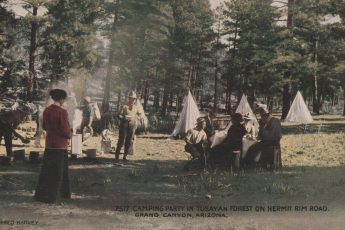